The Best of Me - Story 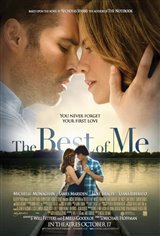 Nicholas Sparks, author of bestsellers such as The Notebook and Message in a Bottle, has been actively engaging readers with his novels for over 10 years. Born in Omaha Nebraska, Nicholas moved around the country with his family several times before permanently settling down in Fair Oaks, California. Graduating valedictorian from his high school and receiving a full post secondary scholarship, he pursued an academic career at the University of Notre Dame. Majoring in business finance, he graduated in 1988.

That same year, he met his wife Catherine and after a whirlwind romance, married her just over a year later. For the next few years, Nicholas worked at odd jobs, including waiting tables and real estate appraising. Having already written two unpublished books, in 1994 he wrote The Notebook. He sent it to several agents, and finally struck gold when Theresa Park read it and decided to represent him. She obtained a $1 million advance (unheard of, for a first time author) for Nicholas. The book hit the New York Times bestseller list in the first week it was released. He followed it up with Message in a Bottle and A Walk to Remember, both of which were bestsellers. All three were made into movies, along with Nights in Rodanthe, Dear John, The Lucky One, The Last Song and Safe Haven. His novels are considered one of the most successful franchises in Hollywood, featuring some of Hollywood's biggest stars, such as Channing Tatum, Zac Efron, Rachel McAdams and Ryan Gosling,

The latest adaptation is The Best of Me, starring James Marsden and Michelle Monaghan, about two high school lovers reuniting after being apart for 20 years. Nicholas has written 18 novels to date, his latest being The Longest Ride, which is slated for a film adaptation release of April 2015.

Nicholas, who holds a black belt in Tae Kwon Do, and his wife have five children: Miles, Ryan, Landon, Lexie, and Savannah. They make their home in North Carolina. He continues to exercise his creative imagination by continuing his writing.