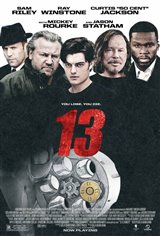 6 votes and 2 Reviews | Write a Review

In need of money, Vince overhears a conversation about a dead man who was going to make easy money. He steals the envelope the dead man received and goes to a secluded building in his place.

The job is participating in a game of Russian roulette, in which men are seated around a table and given a pistol with one bullet in it. Each in his turn has to point the gun at the man across the table and pull the trigger. Vince tries to back out, but is forced to stay and take part in the game.