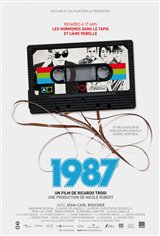 4 votes and 1 Reviews | Write a Review

Ricardo makes a list of things to accomplish before he goes off to college: lose his virginity with his girlfriend Marie-Josée, go on rides in his old car with his friends and open an alcohol-free nightclub for minors like himself. Estimating that he needs five thousand dollars down payment to start his business, the young man comes up empty when the bank rejects his loan application on the grounds that he’s unemployed.

To remedy this, his father, exasperated to see Ricardo hanging out all day doing nothing, finds him a job as a valet at the Italian restaurant where he himself plays the accordion. Now on the night Ricardo planned to have sex for the first time with Marie-Josée, he has to work instead. After damaging a customer’s BMW, Ricardo, back to square one, believes he has found a way to raise five thousand dollars.