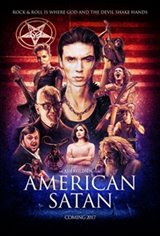 Half of the young members of a rock band are from England and the other half are from the States. They decide to drop out of college and move to Los Angeles to chase their dreams, where they live in a van while struggling to make it.

A stranger (Malcolm McDowell) sees their true potential and emotionally manipulates them during a time of weakness. They name themselves American Satan, and sing about worshipping the devil. Their music and controversial altercations end up influencing society beyond anything this century has seen. But how far will down this road will they go before it's too late to take back control of their destiny?