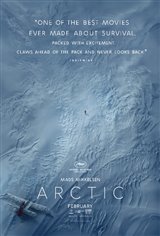 When the cargo plane he's on crashes, Overgard (Mads Mikkelsen) finds himself stranded in the Arctic. Hoping for rescue, he carves a giant S.O.S. in the snow, turns the plane into a makeshift cabin and ice fishes for food. Weeks pass, but he reasons that by staying put in the downed plane he has a better chance of surviving than if he set out on the frozen tundra.

When a helicopter flies overhead, he hopes for rescue, but the chopper is caught in a powerful draft and also crashes, killing the pilot and seriously injuring the co-pilot. He pulls the co-pilot out and fixes a gash she's sustained. The helicopter provides him with a lighter and a sled, which leads him to debate putting the woman, who slips in and out of consciousness, on the sled in an effort to leave the crash site and find civilization.