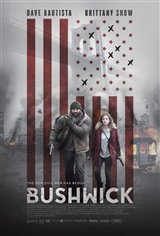 Lucy (Brittany Snow) is traveling on the subway when it becomes clear something horrendous is taking place above ground. She gets out in her neighborhood of Bushwick in Brooklyn to find black-clad military soldiers are attacking everything in sight.

An ex-Marine named Stupe (Dave Bautista) saves her from a couple of thugs. She follows him and finds out Texas is trying to secede from the United States of America. Stupe, who has been injured, asks for her help. As the forces spread from Bushwick to Manhattan, they discover one thing on their side is that the Texas soldiers didn't expect there to be so many guns outside of their state. The people of New York stick together and stand up to protect their city.