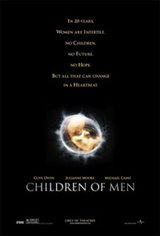 Set in a near future where the human race has lost its ability to reproduce, England descends into chaos when the world's youngest citizen dies at 18.

As London is torn apart by violence and warring nationalistic sects, disillusioned bureaucrat Theo (Clive Owen) becomes an unlikely champion of Earth's survival. When the planet's last remaining hope -- lone pregnant woman Kee (Claire-Hope Ashitey) -- is threatened, this reluctant activist is forced to face his own demons and protect her from certain peril.

Based on the best-selling novel by P.D. James.