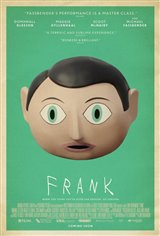 An eccentric story of an avant-garde pop band whose leader Frank (Michael Fassbender) wears a large artificial head. Frank and his band, the unpronounceable Soronprfbs, are on not-very-successful U.K. tour when they first encounter Jon (Domhnall Gleeson), a musician who is recruited to the lineup despite his lack of talent.

Jon is invited to join the band in Ireland, where they have a secluded country house—a perfect place for composing, what they believe, a most-certainly-to-be-the-greatest-album-ever. Manager Don (Scoot McNairy), theremin player Clara (Maggie Gyllenhaal), bassist Baraque (Francois Civil) and drummer Nana (Carla Azar) and, of course, Frank and Jon are trying to work out their differences while preserving each others' artistic freedom.