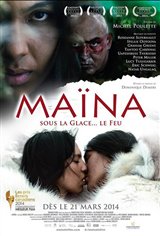 North America, before the arrival of Europeans. Maïna, the daughter of an Innu chief, is determined to be equal to men, even to hunt. Following a bloody confrontation between the warriors of her tribe and a group of Inuit, a young boy named Nipki is taken prisoner. Having sworn to the boy's dying mother that she would look after him, Maïna immediately goes to his rescue, but she’s captured by Natak, the leader of the Inuit clan.

The young woman is forcibly taken to a land of ice, where she is faced with very different conditions than she is used to. Maïna is surprised when her captor, instead of abusing her, takes great care of her, in addition to treating Nipki as his own son. Soon, a romance develops between Maina and Natak, but cultural differences create tension in their relationship.

Canadian Connection: Filmed in Quebec. The director and most of the cast are Canadian.