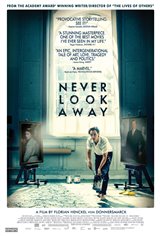 In post-war East Germany, Kurt Barnert (Tom Schilling), haunted by the disappearance of his aunt Elisabeth during the Nazi regime, is a student at the Dresden Academy of Fine Arts, where he falls in love with fashion student Ellie Seeband (Paula Beer). Their relationship comes under scrutiny from her father, Professor Carl Seeband (Sebastian Koch), who worked as a gynecologist for the Nazis during WWII.

Kurt and Ellie decide to flee to Western Germany. There, Kurt is able to attend the modern art academy in Dusseldorf, where his talent is recognized, but he struggles to find his voice after years of living under the restrictive conditions of the Nazi and GDR-regimes.

When he discovers that a terrible crime was committed by Carl during the war that ties Kurt's past to that of Ellie's family, he begins transforming his childhood traumas into art.

In German with English subtitles.