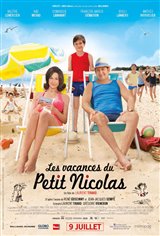 On vacation at the seaside with his parents and his Grandma, little Nicolas makes new friends: Blaise, who lives at the hotel run by his family, the gluttonous Fruitful, an English boy named Djodjo, whiny Crépin and stubborn Come. While Nicolas’ parents lounge at the beach, Grandma distributes candy to children, asking to be paid in kisses. This seaside routine is soon disrupted by the arrival of Mr. Bernique. A former classmate of Nicolas’ father, he’s accompanied by his wife and their daughter Isabelle, who keeps staring at Nicolas. Afraid he’s going to be forced to marry the strange girl, the mischievous boy starts spreading lies about his parents and playing nasty tricks on the Bernique family to get them to leave the hotel. As if the holidays weren’t hectic enough, a fiery Italian producer comes to make a film at the hotel and wants to turn Nicolas’ mother into a movie star.