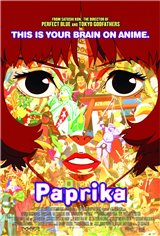 21 votes and 2 Reviews | Write a Review
29-year-old Dr. Atsuko Chiba is an attractive but modest Japanese research psychotherapist whose work is on the cutting edge of her field. Her alter-ego is a stunning and fearless 18-year-old “dream detective,” code named Paprika, who can enter into people’s dreams and synchronize with their unconscious to help uncover the source of their anxiety or neurosis.

At Atsuko’s lab, a powerful new psychotherapy device known as the “DC-MINI” has been invented by her brilliant colleague, Dr. Tokita, a nerdy overweight genius. Although this state-of-art device could revolutionize the world of psychotherapy, in the wrong hands the potential misuse of the device could be devastating, allowing the user to completely annihilate the dreamer’s personality while they are asleep.

When one of the only four existing DC-MINI prototypes is stolen in the final stages of research around the same time that Dr. Tokita’s research assistant Himuro goes missing, Atsuko suspects it’s not a coincidence. If the DC MINI isn’t found, this could lead to the government’s refusal to sanction the use of the machine for psychotherapy treatment.

When several of the remaining researchers at the lab start to go mad, dreaming while in their waking states, haunted by a Japanese doll which featured heavily in the dreams of one of Himuro’s schizophrenic patients, Atsuko knows for sure that whoever is manipulating the machines has a more evil purpose. The DC MINI is being used to destroy people’s minds.