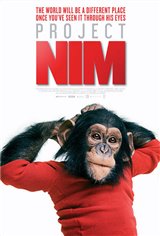 6 votes and 1 Reviews | Write a Review

Days after being born in a cage at a primate research centre, Nim is taken away from his birth mother and placed into the waiting arms of a psychology graduate student with three children of her own. Sucking on a pacifier, baby Nim gazes into his adoptive mother's eyes just as her own babies had—and the bond between them is immediate. He's clothed and taken to live with his human family in a large house on Manhattan's Upper West side.

Nim learns sign language, use the toilet and practice table manners. He laughs, cries and craves attention. But the "wild animal" in him also surfaces. Nim's life takes surprising twists and turns that see him moving on to other homes. It's not until Nim is five years old that he has contact with his own species. But the humans who cared for him never forget him, coming to his rescue several times. Nim never forgets the humans either, recognizing them even after several years' absence.