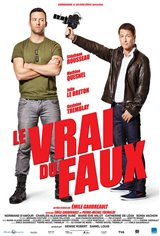 When a fan of his racing films dies in a car accident while trying to imitate a stunt, director Marco Valois is made publicly accountable and sinks into a deep depression. After finding out the deceased had suffered from post-traumatic stress following a tour of duty in Afghanistan, Marco decides make a movie about this issue. He finds a perfect case study when he meets troubled veteran Éric Lebel, who’s plagued by a terrible event that occurred while he was stationed near Kandahar. He’s never talked to anyone about this event, not even his psychologist. When Marco asks Éric if he’ll participate in his film, the ex-soldier is reluctant, but the self-centered filmmaker is persistent. He wants to make a serious film — at any cost.