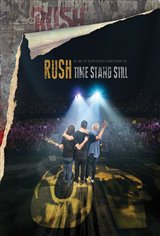 In 2015, Rush went out for a 40th anniversary tour; rumored to be the last tour of its kind and the end of their life on the road. Narrated by Paul Rudd, Rush: Time Stand Still is a documentary event that covers the R40 tour and the unique relationship Rush have with their devoted fans. Candid interviews with Geddy Lee, Alex Lifeson and Neil Peart bring Time Stand Still to an emotional conclusion for a band who built their career the old-fashioned way. One show at a time.