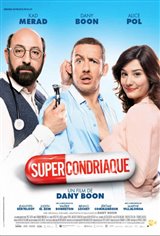 Hypochondriac Romain Faubert moves in with his doctor, Dimitri Zvenka. Despite the doctor’s good intentions, he has not been able to cure Romain in 18 years. Pressed by his wife, who’s no longer able to bear the phobias of this guest who seems to have taken root, the practitioner makes every effort to find Romain a companion, believing his problem is really loneliness. To no avail. However, Dimitri has another card up his sleeve.

He takes Romain with him to Calais, where he does non-profit work with Tcherkistan refugees, believing that if Romain sees real suffering, he’ll come to his senses. Anna, Dimitri’s activist sister, mistakes Roman for Anton Miroslav, a leader of the Tcherkistan freedom fighters. Meanwhile, Anton has not only stolen Romain’s ID but is hiding in Romain’s apartment.