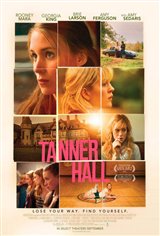 Everything about Tanner Hall is somewhat timeless: the slightly crumbling ivy-clad exterior, white porcelain sinks and teenaged girls in pleated skirts, cardigans and knee socks. The story of the people inside this grande dame of an institution, however, troubles the benign surface of these classic images.

It is fall, and Fernanda (Rooney Mara) returns to her beloved Tanner Hall to begin the new school year. She is yearning to see her old friends Kate (Brie Larson) and Lucasta (Amy Ferguson). Although clearly girls of privilege, they exhibit none of the stereotypical behaviors assumed of children of their class; rather, they are at once worldly and innocent, hovering on the razor's edge between adolescence and adulthood.

But there's a new girl: Victoria (Georgia King), who is clearly one angry, emotionally dishevelled young woman. Victoria wants scalps on her belt, and within hours of her arrival, she has set the trio of friends against each other without their fully understanding why or how. That's just the first day.

Victoria instinctively understands that Fernanda is her prize because she is practical, clear-eyed and not easily fooled. But while Victoria focuses on manipulating her, Fernanda's attentions are elsewhere, mostly on her developing affections for Gio (Tom Everett Scott), the husband of one of her mother's friends. Vulnerable to the stirrings of what she thinks is real love, Fernanda allows his pursuit of her to get tangled up in the teenaged machinations around her, and the outcome is a much-too-rapid vault into adulthood for each girl.