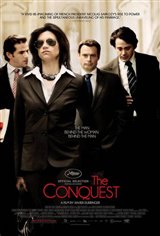 In 2002, following his re-election as President of the French Republic, Jacques Chirac appointed Nicolas Sarkozy the Minister of the Interior, denying him a coveted post as prime minister. Undaunted, the ambitious politician surrounds himself with carefully selected advisers and his wife Cecilia, all relentlessly pursuing his goal: access to the presidency in the 2007 election. On his way, however, he runs up against the equally ambitious and devious Foreign Minister, Dominique de Villepin.