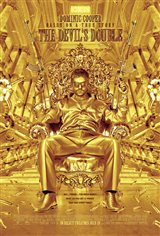 Raised in a wealthy household in Baghdad, Latif Yhia had Saddam Hussein's eldest son Uday as a classmate. Their resemblance was remarked upon. Years later Latif was summoned to Hussein's palace and ordered to be sadistic Uday's body double. When he refused, he was imprisoned and tortured. When his family was also threated, he decided to cooperate. After extensive training, Latif became Uday's double in 1987.

Based on the book by Latif Yahia.