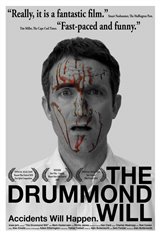 8 votes and 1 Reviews | Write a Review

Shot on the Red One in black and white, THE DRUMMOND WILL is a collision between old and new. A black comedy set in decaying rural England.

It follows estranged brothers Marcus and Danny Drummond as they find themselves on a surprisingly dangerous undertaking to unravel the mystery surrounding their father's very unlikely wealth.

A deeply affectionate modern retelling of the classic comedies and murder mysteries from the Ealing era of British cinema, THE DRUMMOND WILL imagines what it would be like to be stuck in a world where the strange rules of Ealing cinema apply. A world where life continues quite as normal in the face of escalating body counts, where sleepy English villages invariably harbour any number of dark secrets, and where you only really know who the murderer is when everybody else has been killed. The thoroughly modern Danny and Marcus are trapped in just such a world, and are quickly swept out of their depth. As they realize they'll need to rely on each other if they are to survive, and modern ideas like forensics, cell phones and common sense won't help them, it quickly becomes clear that, inevitably, nothing is what it seems.