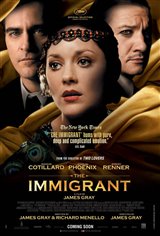 Two Polish sisters, Ewa Cybulski (Marion Cotillard) and Magda (Angela Sarafyan) are on a ship bound to New York from their homeland in search of the American dream. When they reach Ellis Island, a routine inspection by doctors shows that Magda is ill. She's quarantined, while Ewa is released on the streets of Manhattan.

Vulnerable and alone, Ewa doesn't know where to turn. She doesn't know anyone in New York and when she meets a charming man named Bruno (Joaquin Phoenix) who offers to take her in, she feels she has no choice. He soon forces her into prostitution and she doesn't see a way out, until she meets Bruno's cousin Orlando (Jeremy Renner), who's a magician. He restores her belief in herself and her hopes for a brighter future. She sees him as her only chance to escape the nightmare that her life has become.