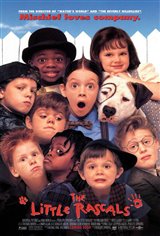 6 votes and 3 Reviews | Write a Review

Spanky, Alfalfa, Buckwheat, and the other characters made famous in the Our Gang shorts of the 1920s and 1930s are brought back to life in this nostalgic children's comedy. Although the setting is the present day, the characters remain much the same, down to their membership in the He-man Womun Haters Club.

When Alfalfa (Bug Hall) starts to question his devotion to the club's principles after falling for the beautiful nine-year-old Darla (Brittany Ashton Holmes), the rest of the gang sets out to keep them apart. An attempt to win the grand prize in a go-cart race also comes into play, providing opportunities for physical comedy, while Darla's and Alfalfa's story trades on the humor of innocent puppy love.