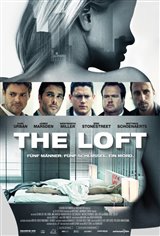 Five married men jointly own a loft that they use to meet their mistresses in secret. However, when the bloodied body of a murdered young woman is handcuffed to the bed in that very same loft, the men begin to suspect each other of being a murderer.

Based on the 2008 Dutch-language Belgian film Loft by the same director, Erik Van Looy.