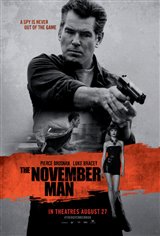 When the past lures Peter Devereaux (Pierce Brosnan) out of retirement, the ex-CIA agent finds himself entangled in a political conspiracy involving high-ranking CIA officials and the Russian President-elect.

Based on Bill Granger's political thriller, There Are No Spies, the seventh installment in The November Man series.