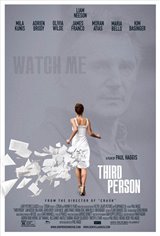 New York writer Michael (Liam Neeson) has recently split with his wife. His lover, Anna (Olivia Wilde), comes to visit him in a Paris hotel, but their relationship is complicated due to her inability to commit—he doesn't know it, but she's hiding a terrible secret.

Despite being accused of negligence in an accident that almost caused her son's death, New Yorker Julia firmly denies being responsible. Charged with negligence, she loses custody of her son to his father Rick, who tries his best to take the boy away from her permanently.

American businessman Sean falls in love with a Gypsy woman while on a trip to Rome. He gets caught up in her life to the point that he's involved in trying to free her kidnapped daughter from an Italian gangster. When he's asked to help put up money for her ransom, Sean begins to wonder whether he's being set up.