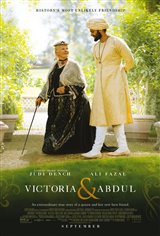 Queen Victoria (Judi Dench), at the time the longest serving monarch in history, meets a clerk named Abdul (Ali Fazal) when he is chosen to travel to England from his native India for the Queen’s Golden Jubilee — which symbolizes 50 years on the throne. His mission is to present the monarch with a ceremonial coin.

Although he is warned not to make eye contact with Victoria, the young man can't help himself and smiles at her after giving her the coin. Intrigued, Victoria asks for Abdul to stay in England for a while. Thus begins an unlikely friendship between the two.

Based on Shrabani Basu's book of the same name, Victoria & Abdul: The True Story of the Queen's Closest Confidant.